Can “Super Blocks” help your Downtown? 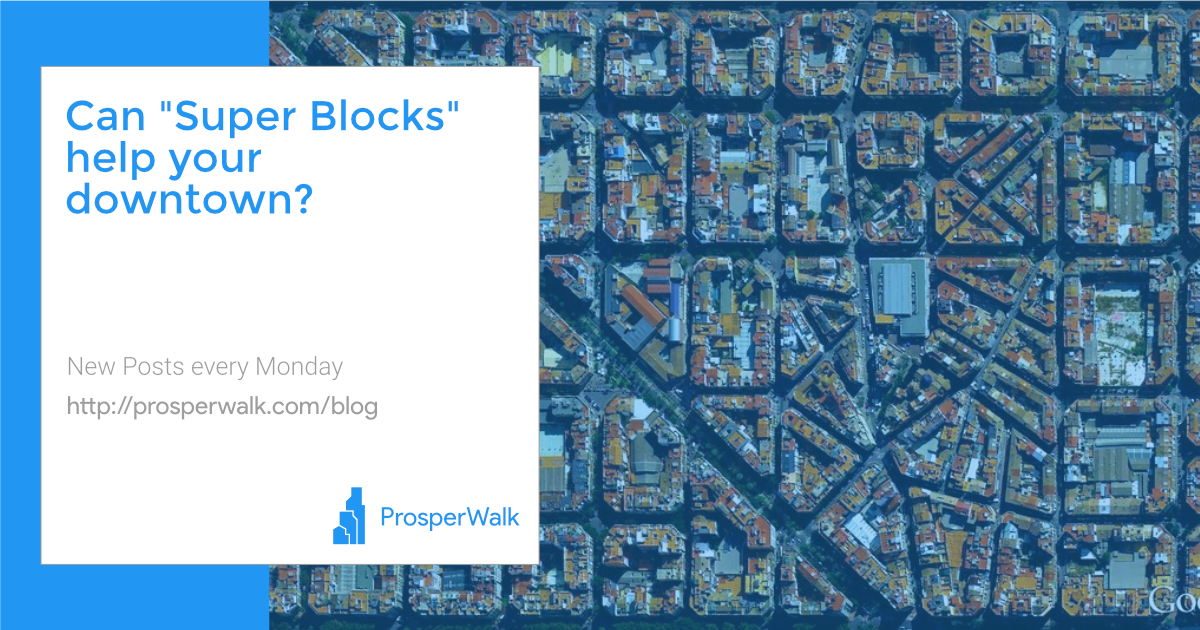 If you take away the space dedicated to cars in an average city, you aren’t left with much. You have narrow strips of walkways but not much else. But what if there was a way to give space back to pedestrians and cyclists. Make cities friendlier to life outside of a car.

In 2014, Barcelona faced major air pollution issues not to mention the immense traffic that cause major noise pollution. The city began developing an urban mobility plan that would drop traffic by 21%. The coolest thing was the idea presented below: They’re called “Superilles” which translates to “Super Blocks”. It’s a concept designed to minimize cars in urban city centers. What’s happening in Barcelona is a little different than the normal concept of a “Super Block”.
What you do is you take 9 city square blocks and close it off to thru traffic. So big freight trucks, buses, or vehicles that are just trying to get from one part of town to the next have to drive around the perimeter. Inside the “Super Block”, traffic is kept at a 10KM/H (or 6 MPH) and curbside parking is replaced by underground parking. The result is more space for street side markets, outdoor games and events.

Inside of this new space, people will have a pleasant streetscape to walk around, mingle, and explore without the fear of cars being around. At the moment, this idea is being tested in 5 neighborhoods but the city has identified 128 areas where it could be implemented.

NW of Barcelona is a city called Vitoria Gasteiz which has been using the “Super Block” concept since 2008. In Victoria they have a large “Super Block” in the city center. It is here that they were able to turn the amount of Pedestrian space from 45% to an astonishing 74%. This drop in traffic also caused a drop in Noise Pollution from 65.5dB to 61dB.

The most impressive statistic from Victoria is the 38% drop in Particle Air Pollution. And best of all, business patronage has gone up. When people walk around the area they are more likely to engage with the businesses around them.

With such a great concept generating such great results, the real question comes in. Will this model work in your Downtown?